Teotihuacan was one of the most remarkable cities of the ancient world.  Today it’s located 48km NE of Mexico City, and considered to be one of the world’s great archaeological sites.  In its day, it was massive, densely populated, and well organized.  It was an important city for hundreds of years, and remained important to the Aztecs, though for different reasons than in earlier times.  Teotihuacan was not, of course, an Aztec city.  By the time the Aztec empire was at its height, this great city had been around for over 1600 years.  We actually know very little about the founding of the great city of Central Mexico.  Of the buildings that remain, the oldest seem to be from about 200 BC (BCE).  But it seems that it was a city of great power between 150 BC and 750 AD.  At this time it became the 6th largest city in the world (after Constantinople, Changan, Loyang, Ctesiphon, and Alexandria).  It’s believed that the population was around 125,000 and up to 200,000. 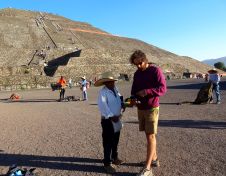 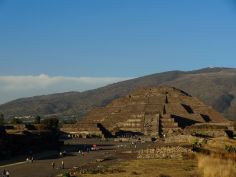