Alpine climber Mark Twight once said, “it doesn’t have to be fun to be fun.”  There are many around who would hear these words processing them with a blank stare and no spark of instant recognition.  But there is an ironclad few who accepts them with a nod and mental flashback to a time where they laid it down, spilled it out and absolutely loved it.  Some go to war and some go to the mountains but the point is to find a place that strips comfort, mental weakness and uncalloused skin from the body leaving an opportunity to see what is lying at the core. 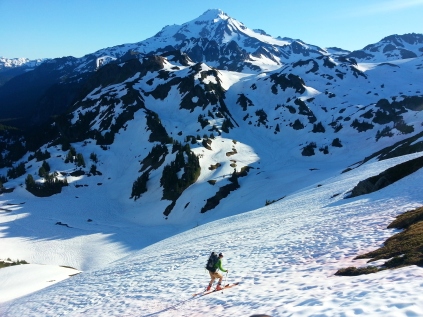 A ski descent of Glacier Peak was the target for the weekend and the conditions were absolutely prime.  Snow was holding in on the slopes and the perfect June weather in the forecast allowed us to pack in without a tent.  Our route started low at an elevation of 1900 feet along the North Fork of the Sauk River amidst towering old growth timber and a rainforest like floor that pressed up on both sides of the trail.  The nine mile approach to our camp lying at the end of the valley gave us ample time to contemplate the full array of glacier, avalanche, ski touring and overnight gear that we had positioned on our backs.  Fortunately, we had towed along the “jammy pack” speakers and every three to four minutes stuck our thighs muscles with a fresh shot of pure energy extracted from the heavy metal and hip hop that we pumped into the valley.  An hour before dusk we reached our basecamp at White Pass where we cooked food, pulled water for the next day, and took some shallow pulls of “Canadian Hunter” whiskey to soften the ground for the night ahead.

The first light of morning bore witness to a surprisingly warm and clear day.  The vistas that seemingly stretched for miles only reached further as the day went on and our vantage points grew higher.  We slapped on our skins and hit the blessed snow that crunched loudly while still hidden from the radiant sun.  Early on an exposed five hundred yard stretch of snow compelled us to replace our uphill ski pole with an ice ax in the event our skins slipped on the icy incline.  The move was calculated given the cliffed out section that hung twenty yards below our traverse.  We managed the risk with the addition of the axes and pushed on.  The route took us across an expansive glacial basin that allowed us to cover ground quickly and log our progress.  We ditched the skis for the last thousand feet to the summit which we reached at three in the afternoon after a couple hundred feet of post holing to the waist in ski boots.  The descent was smooth as we quickly dropped a couple thousand feet on skis passing around a handful of visible crevasses along the way.  Knowing our goal was to make back to the car that evening we kicked ourselves into gear and pushed our skinning pace back across the glacial basin.  Even with this tempo we made it back at 9 pm to our original camp at White Pass that we had left that morning at first light. 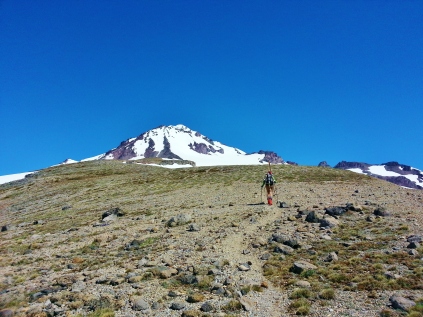 At camp we pulled off our soaking boot ski boot liners and let our feet air out while we repacked our packs with the sleeping bags and tarp that we had left behind.  I then fired up the MSR stove and made two strong cups of coffee in anticipation of the night ahead.  From our perch atop the pass we descended the valley bearing our original approach loads plus the added weight of our snow soaked gear.  After a half mile the daylight retreated behind the westward ridges and our line of sight relied solely on the glow of our headlamps.  The trail conversation was generally muted as we continued to march down valley with a simmering determination.  Four and a half miles from the pass we reached the rustic Mackinaw Shelter at midnight where we pumped water, choked down a granola bar and even contemplated resting there until daylight.  At this point we were spent and very stiff.  But mentally we still had it and downshifted to our final gear for the last five miles back to the trailhead.  At three in the morning we made it to the car and felt the relief of unsaddling our burdens.  Eagerly we searched out the sport drinks stashed in the car, tossed in our packs and racked our skis.  An hour later we made it back to the main roads and found ourselves replacing lost calories at a breakfast diner just as the sun was cresting above the mountains we had come from. 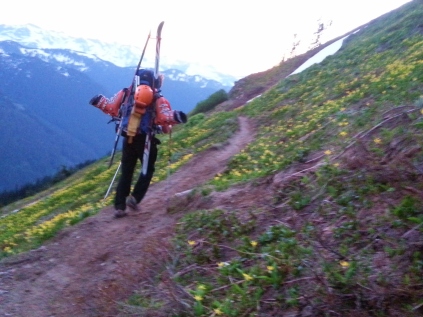