Serving to stoke ambition and anticipation the altitude of the Pan-American continued to creep higher as we rolled south from Colombia into Ecuador.  Lurking behemoths of a scale we had never before seen sat shrouded behind clouds towering along the “Avenue of Volcanoes.”  Pressing the window straining for a glimpse was an activity I stuck to in vain.  But alas, faith in their looming presence and a hope of gracious conditions during our upcoming attempt was all I could hold on to.

Chimborazo from the Pan-American Highway

When the time came we departed from the town of Riobamaba following the flank of Chimborazo toward the park gate.  Our entrance had been the point of much conversation and speculation over the subsequent weeks.  Due to a climber error induced accident in 2012 the government mandated that all who seek to ascend glaciated mountains must use an Ecuadorian certified guide.  In direct conflict with the ethos of our climbing and the mandates of our budget we graciously chose to sidestep this imposing decree.  Accounts from climber friends ahead of us told a story of invasive searches at the entrance specifically looking for crampons, ice axes, snow pickets or any semblance of climbing gear.  Knowing that the park closes at four pm we decided to hit the gate at three forty five pm on a Sunday afternoon.  As we rolled through in the Land Cruiser the ranger waved, we waved back and continued nonchalantly up the road.  Waiting patiently for the cover of darkness we read and took in views of Chimborazo from the parking lot of the climber refugio.  Once the dark cloak of night was drawn we began to sort our gear by headlamp.  Confident in our packing and hopeful in our ability to hear the alarms, we plopped into the front seats of the Land Cruiser, pulled our sleeping bags over ourselves and settled in for the night.

Beckey and a Vicuna 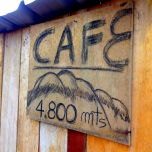 With nightfall we sort our gear

Venturing high into alpine settings requires an agreement between both parties involved, the mountain and the climber.  To provide the strongest margin of safety possible the alarms started chirping at 11 pm and our “alpine start” began the day before the climb did.  Chimborazo is notorious for hazardous rock fall and the season’s ample snowpack would prompt wet slides in afternoon sun which we aimed to avoid.

The climb was draped in darkness for nearly six hours before the sun touched the tops of the string of volcanoes lying just to the east.  Under direction of headlamps we struck a route and made it to the final ridge that would lead us to the summit.  Nearing the 20,000 foot ceiling the air was nearly absent of wind but each breath was an accomplishment in itself – dry to the mouth and icy to the beard. 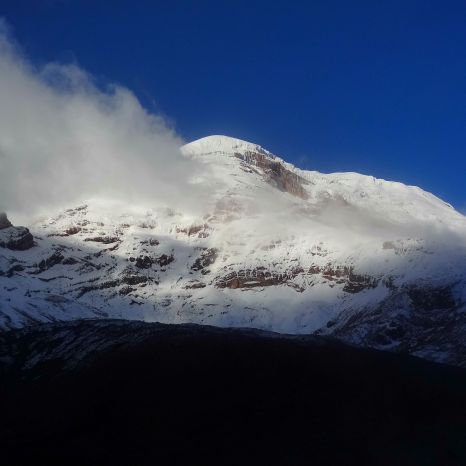 A clear view of Chimbo 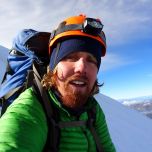 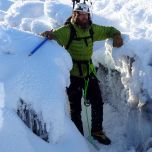 Leaning on the Andean penitentes

The summit met us with the welcomed warmth of the rising sun and the beautifully lit tops of Cotopaxi and Cayambe standing in the same direction.  After seven hours of continuous climbing we refueled and took in the unique scene of snow, ice and sky that lay before us across the summit.  Penitentes are a unique occurrence to the Andes consisting of snow waves reaching approximately five feet in height.  They are formed by the crossing winds and can impose an unforeseen obstacle for weary climbers looking to traverse their expanse at elevation.  At times the penitents were ridged and frozen while the next could be built from soft, sugary snows both which are equally difficult to cross when one breath doesn’t come freely after another.

Shadow of Chimborazo on the descent 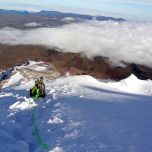 Looking out toward Beckey far below

Heavy snow on the descent

With half of our objective achieved it was time to descend nearly five thousand feet back to the Land Cruiser sitting far below.  The air seemed to noticeably thicken as we rapidly dropped elevation.  At sea level we enjoy air that has an oxygen percentage of 21%.  The summit of Chimborazo cut our oxygen percentage by well over half to 9.5%…deep breaths people (http://www.higherpeak.com/altitudechart.html).

Chimborazo showed enormous grace as we climbed to her 20,702 foot summit and pushed a new personal altitude ceiling.  A deep respect for the pulse of the mountain and proper preparation have been the two main ingredients we take with us to the alpine, and with any luck it will be the recipe that will continue to bring us back.