Ten Latin countries in five months time… Ten Spanish speaking counties. Ten Roman Catholic countries. Ten countries obsessed with fútbol. With all the similarities, it’s not unreasonable to assume the memories could become a bit blurred as one country fades into the next. After all, nearly everyone south of the Rio Grande speaks the same language and prays to the same God, so borders must be based on arbitrary geographic barriers and a new country visited means little more than a new flag to fly and currency to exchange, right?? Wrong. 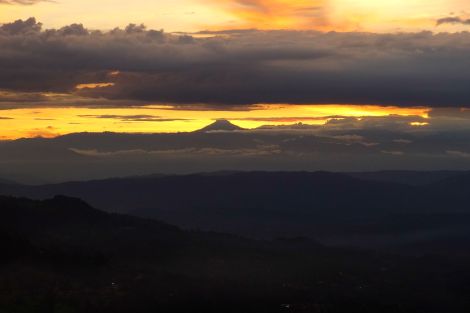 As we push further south, one aspect that continues impress is how different Latin countries and cultures are from each other. From cuisine to musical preferences, a Costa Rican has little in common with a Mexican or a Panamanian with a Salvadorian. Latin countries posses an abundance of uniqueness: culturally, geographically, economically, politically – to date, perhaps no country provides more contrast than that of Colombia.

In all we spent nearly a month exploring Colombia, yet we left feeling there was still so much more to see. Our time began with a week in the vibrant and well preserved colonial town of Cartagena. Once our dependable Land Cruiser was rescued from the reaches of the port authority, we answered the call of the mountains and pointed her wheels south. Our objective was a nevado in the central Colombian state of Tolima. The drive was far too long to be completed in one day, so we pulled a classic move from ‘The Off Belay Playbook’ and laid up for the night behind a gas station along the highway. — A note to fellow overland travelers: gas stations are an excellent place to spend a night when one does not want to diverge too far off the road. Typically they are well lit, monitored during night and on level ground. All of which are desirable qualities when navigating an unknown country, especially one with security concerns.

Two days later we arrived in Manizales, a university town located in the northern part of Colombia’s much heralded coffee country. A couple days were spent reading, resting and acclimatizing at 12,000′ in the high plains just east of the city. We parked Beckey in front of a large coffee ‘bodega’ or storage warehouse and set up shop. Here we had our first encounter with the high-altitude indigenous peoples of South America. The landscape was stunning and the people of the small town were incredibly hospitable. We came to soon realize that the generosity and friendliness we experienced was indicative of most all the people of Colombia. It’s as if every Colombian is in on a nationwide campaign to rebrand their country as the most friendly in the world. If so, they are well on their way.

Once we felt somewhat acclimatized, we swung around to the south end of Parque Nacional de Nevados to begin our ascent of Nevado del Tolima (17,300′). Our approach commenced around 7,000′ with the goal of breaking the tree-line 4,000′ higher by dark. A number of factors ensured we would not be successful in our goal, including, but not limited to i) a late start around 3:00pm ii) multiple stops to talk and take photos with no less than 3 Colombian hiking groups during the first 1.5 miles iii) the dense jungle canopy which seemed to all but reach down and grab the tops of our backs with vines and bully us with fallen trees. Darkness fell and we were still hours away from our objective. Setting up camp anywhere in the jungle would have required us sleeping right in the middle of the muddy single-track trail, but as luck would have it, we came across a waterfall within 45 minutes of switching on our headlamps and had just enough clear space to throw down our bivy bags. After an hour of attempting a fire with jungle soaked wood, we threw together a quick feed and called it a night. Morning came around and we resumed our struggle against the green vegetation surrounding us. By mid-morning we broke out of the jungle and into a Dr. Seuss-like land of high alpine trees. To our dismay, the morning clouds never cleared and visibility dropped steadily. Ultimately, we made the call to turn around at 15,500′ as the clouds closed in further. The goal of the outing was to push the legs and the lungs. Both were achieved and neither of us had an interest in a socked in summit coupled with a nighttime descent. We retreated to 11,000 feet for our final night and were back to the car by late morning the third day.

A few hours later we arrived in Ibague, the closest city to Nevado del Tolima. Our schedule was clear for the next week so we decided to jump online and see what the World Wide Web had to say about the area. Within a matter of minutes Carson discovered an English Institute that provided free accommodations and one meal a day for those who were willing to teach two hours a day. In all honesty, it sounded too good to be true, but we decided to sniff it out. We arrived at Connections English Institute later that evening and were greeted by owner, educator and future friend Alex Charry. I could go on and on about how hospitable he was and how fulfilling it was teaching English the youth of Ibague, but that would be an entire post in itself. Suffice to say our time was everything we were looking for and more. Alex allowed us to experience Colombia in a way that never would have been possible without a local expert who both knows and loves his country. We devoured arepas and other delicious local cuisine (largely thanks to Alex’s mother), worked out at the local gym, kicked back aguardiente, shook it out at the local discotheque (twice), and spent two days climbing at crags only the locals know of. Alex answered all our cultural and language questions, cracked jokes with us and introduced us to his friends. We could not have asked for more. If anyone is interested in teaching English abroad, we highly recommend looking into Connections. (http://www.institutoconnections.com/english/index.php).

It was not easy to leave Ibague, but we needed to move toward Ecuador and heard rave reviews about a climbing area 45 minutes north of Bogota. A full day of driving later, we arrived in Suesca and began scoping what the crag had to offer. To our surprise, we saw very few climbers in the ‘birthplace or Colombian climbing.’ Instead the 3km long crag was packed with young families and mid-20s couples from Bogota on vacation for Semana Santa. We hoped their would be a bit of a scene such as what you find in Joshua Tree, Smith Rock or any number of other North American climbing hot-spots, but that was not the case. We did however befriend a fellow overlander hailing from the great country of Canada whom was there to climb. As the only gringos on-site, we decided to join forces and strung together two days of solid climbing and story telling before the rain came and we decided to get back on the road. We departed Easter morning for our three day drive to Quito. Our timing proved to be a bit inopportune as we were smacked square in the face with 6+ hours of Easter Sunday traffic in and around Bogota. We were, however, fortunate enough to have left the country a mere two days before protesting Colombian farmers locked the country down, closing many roads. Cory Hall, our new Canadian amigo was not so fortunate and had to spend a couple days negotiating road blocks to continue his journey. 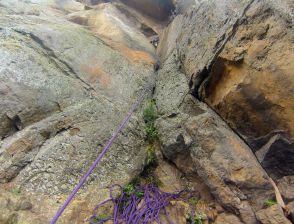 All in all, Colombia is simply an exquisite place. A land of beautiful people, picturesque countryside, large mountains, stellar beaches, bustling cities and savory food. It is not the dangerous, cartel controlled place it was 20+ years ago. Instead Colombia is hospitable, memorable and should be near the top of every traveler’s list.

3 responses to “Colombia – Connections™ and Climbing”