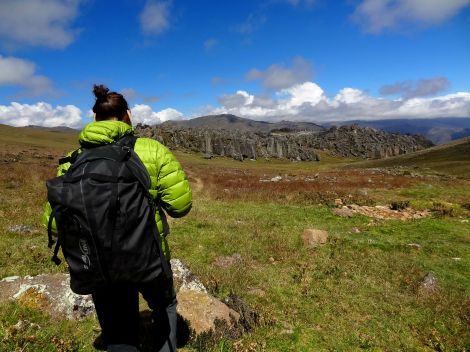 Lone sentinels broad and strong stood before us down valley.  Mere steps before the basin leveled with the distant ridge the crag held its ridged formation.  Born of a distant age the scene had been slowly weathered and worn to its present character.  A massive Stonehenge of natural composition turned playground for those who aspire to scale its reach.

Beckey and the Cordillera Blanca

The first glance of this scene upon cresting the approaching hill suspended the thought of rock climbing from my mind.  It removed all consideration of the load of gear situated between the shoulders and gave ample reason for pause.  If a child innocent in nature sat with a blank sheet, crayons in hand and was to draw a climbing area of aesthetic appeal and practical approach this it would be.  Where the crayons failed to meet the paper the child unknowingly would be drawing the mystic afternoon clouds creeping in a quiet procession around the clinging climbers exposed on the dampening rock.  Once complete this picture of adolescent imagination would find its natural match deep the highlands of Central Peru in a place called Hatun Machay.

Having traveled 1,200 miles since our last time on the rock we had arrived at one of the highest climbing crags in the world sitting coolly, and I do emphasize coolly at a humble 14,000 plus feet.

Reflections of things to come

The dirt track from the valley below stops abruptly upon reaching a modest assembly of stone, straw and wood arranged as the climber hut.  Stocked with a full selection of Argentine climbers the refugio offered a warm greeting from the constantly sunbathing Argentine proprietor and a kitchen to cook up a hot meal to warm cold bones.  We spent one evening lounging and playing games with the jovial Argentines, thawing our hands by the fire and drinking rum with our two French Canadian friends.  The following nights were spent a half mile away in a slightly colder setting tending to our Off-Belay budget through our tried and true method of camping in the absolute middle of nowhere.

The rock itself ran the gambit of possibilities with face climbing, broad arêtes, overhanging caves and hand cracks all as part of the mix.  Sharp, crimpy holds allowed for strong, confident moves but were incredibly unforgiving when hands slipped from a crack or an ankle slipped from a nub. 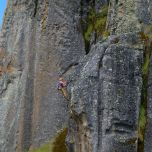 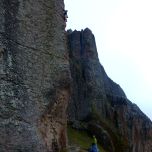 There will be blood

Soaking in the sun

Top of the roof

As the days worn on we continued to push the rating scale and projected a number of routes up near the edge of our abilities.  The community of climbers complimented the setting in a profound way and we made friends during sunny recesses from Queensland and Quebec alike.  Hatun Machay provided an incredibly unique setting to climb and explore as we waited for the alpine weather and the snowpack of the Cordillera Blanca range to improve closer to our liking.