The tug-a-war for Tikal is on display from the moment one sets foot upon the sacred grounds.  The preservation and unique quality of the ruins stands precariously on one side of tussle facing an opponent of great inertia.  Beginning in approximately 400 B.C. the Mayans of Northern Guatemala compiled massive quantities of stone for their master masons to chip and cut into the towering forms that have lasted for centuries.  The motivation for such an undertaking was greatly dependent on one’s place in society ranging from duty, religious zeal or the desire to have an unequaled head stone.  The Tikal complex is massive in scale including six pyramids towering as high as 60 meters, an acropolis, enormous plazas, seven ball courts and a palace. 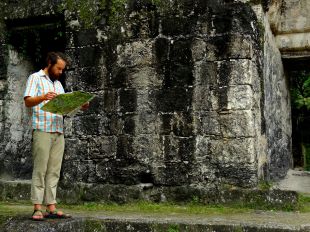 While trekking the grounds the aforementioned struggle for the Tikal becomes even more evident.  Surprisingly, the root of this conflict does not find its origin in the typical screen play of human encroachment that seems to premier itself so often at venues of natural grandeur or historical significance.  Instead, this battle lies with the creeping vines and layering foliage of nature herself.  The tug-a-war for Tikal is between the legacy of the Mayans and the jungle.  Presently, it seems that the small militias of Parque employed Guatemalans armed with machetes are winning in the struggle, but were they to rest the jungle would certainly throw her cloak over the site once again.  Sepia toned pictures from a yesteryear age of discovery show the ruins shortly after they were stumbled upon by modernity in 1848.  The photos fail to hint of the past grandeur of Tikal, depicting unimpressive mounds in the veiled form of a jungle wrapped gift given from humanity to humanity. 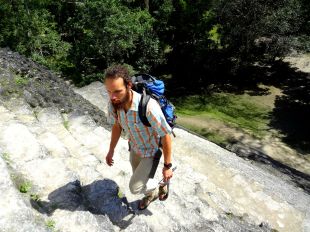 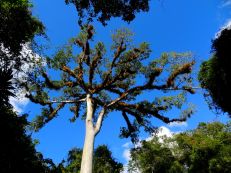 Kapok – the Mayan tree of life 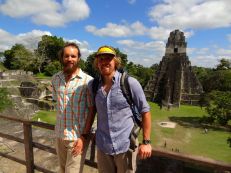 To truly take in the site it is important to understand the specific meaning behind its design.  Each facet of construction and placement of the structures with in Tikal held significance for the Mayan people.  The sacrificial altars were comprised of twenty stones arranged to form a circle signifying the twenty fingers and toes in which humans use to connect with the earth and form their futures.   An additional layer to the incredible workmanship is that the placement of the massive temples is aligned with the terrestrial movements of the sun and stars, adding special meaning to the Mayan worship of their gods.

If I could have my way I would conclude every jungle adventure with a swim in a cleansing body of water.  Fortunately, for us our hostel was situated just outside of the Parque de Tikal on a beautiful lake called Petén Itzá.  With a little aforethought we brought our swim trunks to Tikal and headed straight to the lake after our trek.  The sun was on the descent as jumped off the hand hewn rustic wooden piers, washing the layers of accumulated jungle sweat from our persons.  A perfect end to a memorable day. 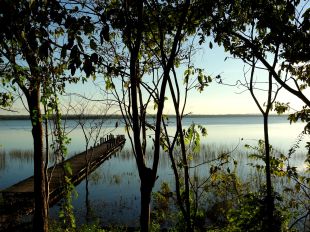 A palapa on Petén Itzá

Austin on the dock

3 responses to “Taking Back Tikal”