Hailing from the Pacific Northwest my conception of the American deserts has been a place of desolation, arid expanse and sparse vegetation.  After our time spent in the region I can confidently say that still hasn’t changed.  But, through it all I was enlightened to the presence of an entirely new concept….the “high desert” landscape.

Enter Mount Lemmon, an elevated craggy oasis perched high above Tucson, Arizona.  Ascending from the desert floor takes one through five distinct biomes ranging from giant Saguaro Cactus stands to a distinct alpine setting clustered with quaking aspens.  The expansive views stretch one’s eyes over three separate states and Ole’ Mexico, completing the package of this lofty escape from the burnt landscape thousands of feet below.

Thankgiving brought us to the area to spend the holiday with our ski touring/climbing/college buddy Matt Nielson and three generations of the Nielson Family clan.  Quick to tease and always full of laughter, this family is also active in the development of new rock climbing routes in the surrounding areas.

Our time together with this crew on the rock was a blast.  Mama Julie Nielson regaled us with stories of the Atacama Desert and Pan American Highway through Chile.  She also gave us a great tip of collecting broken pallets we come across on the road through the Atacama Desert because firewood is non-existent and the night carries a bite.  Papa Joe Nielson and I got back to the basics climbing trad lines and checking each other’s gear placements with a constructive eye.  At one point he pulled out stories from the vault of his own climbing road trips, including an encounter with the famed Scott Fisher from Seattle who was hallmarked in Jon Krakauer’s, Into Thin Air.

This holiday time in the “high desert” added in a memorable way to the list of people that we are thankful for since we embarked on this journey.  Tucson gave time to recharge, climb incredibly scenic routes and spend time with one of the best families around. 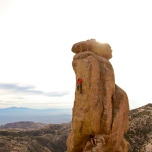 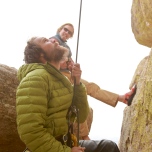 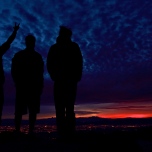